Cover Reveal: THE HOUSE OF A HUNDRED WHISPERS by Graham Masterton 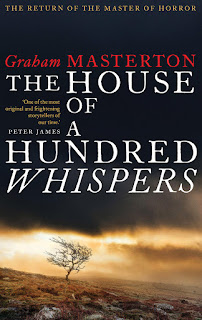 The House of a Hundred Whispers by Graham Masterton
Publication date: 1st October 2020

On a windswept moor, an old house guards its secrets... The new standalone horror novel from 'a true master of horror.'
All Hallows Hall is a rambling Tudor mansion on the edge of the bleak and misty Dartmoor. It is not a place many would choose to live. Yet the former Governer of Dartmoor Prison did just that. Now he's dead, and his children – long estranged – are set to inherit his estate.
But when the dead man's family come to stay, the atmosphere of the moors seems to drift into every room. Floorboards creak, secret passageways echo, and wind whistles in the house's famous priest hole. And then, on the same morning the family decide to leave All Hallows Hall and never come back, their young son Timmy disappears – from inside the house.
Does evil linger in the walls? Or is evil only ever found inside the minds of men?

Graham Masterton is mainly recognized for his horror novels but he has also been a prolific writer of thrillers, disaster novels and historical epics, as well as one of the world’s most influential series of sex instruction books. He became a newspaper reporter at the age of 17 and was appointed editor of Penthouse magazine at only 24. His first horror novel The Manitou was filmed with Tony Curtis playing the lead, and three of his short horror stories were filmed by Tony Scott for The Hunger TV series. Ten years ago Graham turned his hand to crime novels and White Bones, set in Ireland, was a Kindle phenomenon, selling over 100,000 copies in a month. This has been followed by ten more bestselling crime novels featuring Detective Superintendent Katie Maguire, the latest of which is The Last Drop of Blood. In 2019 Graham was given a Lifetime Achievement Award by the Horror Writers Association. The Prix Graham Masterton for the best horror fiction in French has been awarded annually for the past ten years, and four years ago he established an annual award for short stories written by inmates in Polish prisons, Nagroda Grahama Mastertona “W Więzieniu Pisane.” He is currently working on new horror and crime novels.

Posted by The Haunted Reading Room at 5:33 PM